to the Rose festival

Day 02 – Departure to Rila Monastery – the biggest monastery at the Balkan peninsula. Visit of the largest and one of the oldest Bulgarian monasteries (10th C.), included in the UNESCO World Heritage List with medieval defence tower from the 14th C. and fine frescoes. Drive to Plovdiv – the second biggest town of Bulgaria, across the magnificent nature of the Rila and Rhodopi Mountains. Stop at winter resort Borovets. Overnight at hotel in Plovdiv. 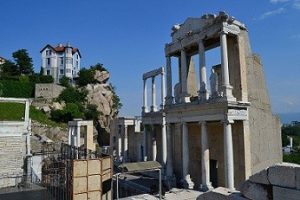 Day 03 – Walking tour in the old part of the town with beautiful old houses from the Bulgarian Revival period (18th – 19th C.). Entrance to the St. Konstantin and Elena church and to the Roman Theatre. Departure to Kazanlak. Entrance to the History museum with exhibition of gold Thracian treasure found in 2004 and to the Thracian tomb – replica. The original tomb is included in the UNESCO World Heritage List. Festive dinner with rich menu and drinks at a local restaurant. Overnight at hotel in Stara Zagora. 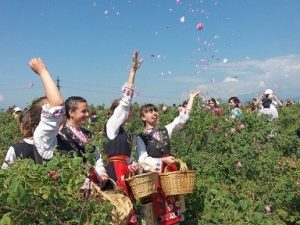 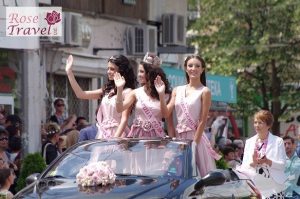 Day 04 – Early breakfast and drive to Kazanlak – participation to the Rose festival: rose picking in the rose fields, authentic rose distillery, presentation of ethereal oils used in the perfumery and tasting of rose jam and rose brandy. Carnival procession in the city center. Open-air buffet lunch barbeque, soft and alcoholic drinks included, with folklore show and national souvenir for everyone. Late afternoon drive to Veliko Tarnovo across the Shipka pass. Stop at Shipka Memorial church. Overnight at hotel in Turnovo. 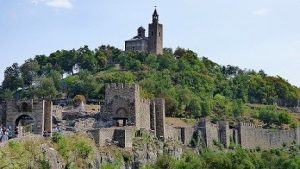 Day 05 – Sightseeing of Veliko Turnovo – the ancient capital of the Second Bulgarian Kingdom (12th -14th C.), picturesquely situated on the hills at the banks of the meandering river Yantra. Visit of the medieval fortress of Tsarevets hill and of Samovodska charshiya – handy craft street. Sightseeing of Arbanassi – 17th C. fortified village with entrance to Jesus Christ’s Nativity Church which interior is covered in frescos depicting 2000 scenes. In the afternoon drive to Ruse and border with Romania. On the way visit of the Rock monasteries by Ivanovo, included in the UNESCO List. Overnight at hotel in Bucharest. 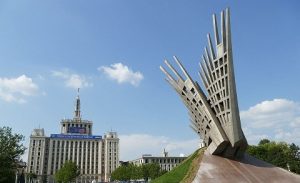 Day 06 – Morning tour of Bucharest’s major sites including the House of Parliament – the 2nd largest building in the world, next to the Pentagon, the Revolution Square, the Old town, the Village museum and the Romanian Athenaeum. Depart for Sibiu – en route a visit to the Orthodox Monastery of Cozia, located on the beautiful valley of the River Olt. The church was built between 1387 – 1391 by Prince Mircea, grandfather to Vlad Tepes – Dracula. Overnight in Sibiu. 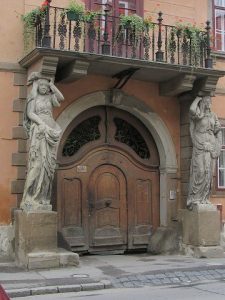 Day 07 – Sightseeing tour of Sibiu including the Tower of the Council, the Liars’ Bridge, the Protestant Church (dated 1321), the Old Town Hall, the Bruckental Museum, and the Jesuit Baroque Church. Drive to the old fortresses built by saxons in the south of Transylvania – Slimnic, Alma Vii and Biertan which are included in the UNESCO Heritage list. In Medias entrance to the beautiful Margareta church from 14th C. and the main tower with 47m high slant. Departure to Sighisoara. Overnight at hotel. 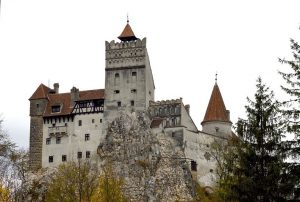 Day 08 – Sightseeing tour of Sighisoara – the old medieval city, included in the UNESCO Word Heritage register – the Clock Tower, the Church on the Hill, the Scholar’s Stairs, the Monastery Church and the towers of the citadel (originally fourteen). Departure to Bran famous with it’s Bran castle also called Dracula’s Castle situated not far from Brasov. The castle got its fame from Dracula’s legend written in 1897 by Bram Stoker. Stop at Rasnov and visit the old citadel. Drive to Brasov. Overnight.
Day 09 – In the morning sightseeing of Brasov including the historical center with the Concil Square, Black Church, Weaver’s Bastion, Ecaterina’s Gate, Black and White Towers. Drive to Bucharest. On the way visit of the Peles Castle, former summer residence of the kings of Romania, located in Sinaia – a well-known mountain resort. Nowadays the Castle is one of the most important museums in Transylvania with an impressive collection of furniture and ornamental objects, carpets, tapestry, sculptures, paintings, collections of weapons from the 15th up to the19th C. Overnigt at hotel in Bucharest.
Day 10 – Transfer to the airport. Departure.